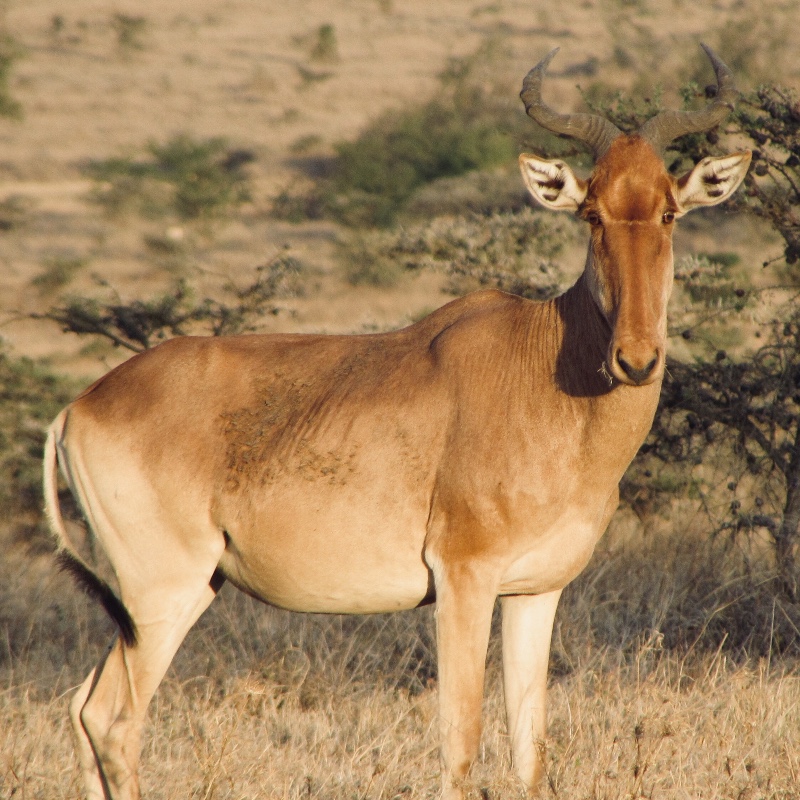 October 4th is World Animal Day, so I figured that this post should delve into three of my favorite animals seen on around the Reserve and briefly about the African elephant. In my previous post, I mentioned the hartebeest, so I’ll gloss over them and move on pretty quickly to the zebra. There are so many zebras and they were amazing!

But first, hartebeests! Although they often look silly or less elegant than most antelopes, they are in fact one of the fastest of the antelope species! They also have a higher endurance in running than most hoofed prey. These various abilities is why they were named hartebeest, which means “tough ox”.  Hartebeests move between being social and forming small herds of 12 to being fairly solitary.

Zebra stripes, much like human fingerprints, are unique to each zebra. Thus, a zebra mom can find her foal by looking at the stripe pattern.  Despite popular belief zebras are more closely related to donkeys than horses. However, like horses, zebras are very social animals and live in large groups actually called harems. Generally, these harems are made up of one stallion and at least six mares and their children. I just learned that mares often keep other zebras away from their foals for the first couple days to ensure that their child recognizes their mom by sight, voice, and smell. And zebras are really really fast, being able to run up to 65km/h!

While visiting Rimpa, I was able to visit the David Sheldrick Wildlife Trust, an organization that focuses on wildlife conversation in Africa. They are specifically known for their Orphan Project; taking in orphaned or injured baby elephants and nursing them back to health and then releasing them back into the wild.  This in an important project because a baby elephant needs it’s mother’s milk until they are two years old, so often times poachers kill the mother elephants because their tusks are so long and the babies are left unable to survive. This is especially sad to think about when you realize that the old adage about how elephants have such a good memory? That’s true – they remember everything they have experienced in their lives.

Can you imagine growing up with a memory of your mother’s murder? It would be horrendous. According to the David Sheldrick Wildlife Trust, this is the case for about 80% of the rescued elephants that they help. You can see it in their eyes; when I visited the David Sheldrick Wildlife Trust and walked among the rescued babies…you could tell which ones had lost their mothers. The keepers I spoke to talked about how some of the orphans will mourn and mope for months, for years, from the loss of not only their mother, but their herd, their family.

The David Sheldrick Wildlife Trust has a wonderful program in which you can foster a rescued elephant and all the money goes directly to these elephants. Thus, I was able to not only become a foster mom to this young cutie, Murit, but also fully come to understand the impact humans have had upon this most amazing species.

So, hartebeests, zebras, and elephants! Next time we will take a lot at the Farm side of things!

Kaitlin Becker is a relative of the Rimpa family and was able to visit during the summer of 2016 in between completing her Master’s degree in Mass Communication from the University of Central Missouri.